OGusers is a popular forum for cybercriminals who are involved in different hacking operations, including the hijacking of online accounts, SIM swapping, Instagram stolen from trade and Twitter hacking accounts.

Almost 113,000 forum users have been informed of a breach of sensitive information such as email addresses, hashed passwords, IP addresses and private messages, source code, website data, and its operations.

On 12 May 2019, OGusers admin revealed that the loss of a hard disk deleted private messages, forums and prestige points in several months. 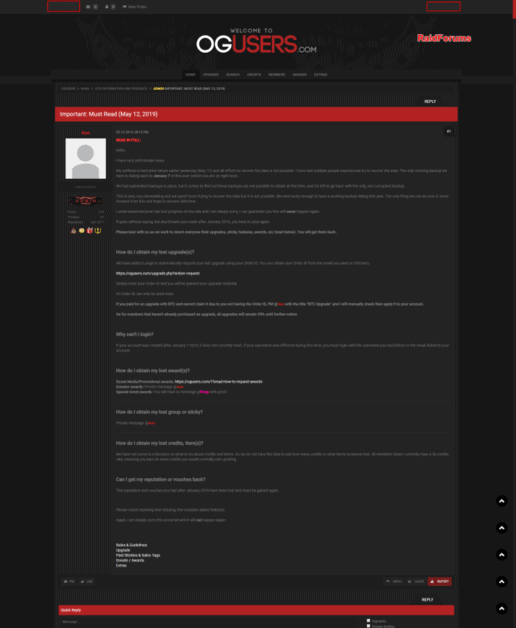 A new hacking community forum known as RaidForums admin has coincidentally revealed it had downloaded OGUsers Forum Database free of charge, and the forum ogusers.com was also broken on 12 May 2019.

He said, “I have uploaded the broken data from this database with their source website files. Their hash algorithm was MD5 which surprised me in default. The web owner has recognized data corruption but not an infringement. So I guess I’m the first to tell you the truth about his statement here or if you don’t want to view your web site. According to his statement, he had no recent backup and I think I’m going to give one on this lmfao thread.

Copy of leaked database data has been verified, and confirmed that the database contains the original data that is part of OGusers and that it appears to hold approximately 113,000 users ‘ usernames, email addresses, hashed passwords, private messages, and IP addresses at registration.

According to Krebs report, “the publication of OGuser’s database has caused a lot of dismay and tragedy for many in the community which is becoming infamous to attract people involved in phone numbers as a way of handling social media, electronic communications and financial accounts of victims, and reselling access to them on the forum for hundreds or thousands of dollars.”

Some users already have phishing e-mails aimed at their e-mail accounts and e-mail addresses.

“OGUsers have been online for nearly three years now and this is the first time that there has been a breach. I understand the frustration of everyone and I am deeply sorry that everything has happened recently. “Again, I’m sorry, and I’m going to do my utmost to make sure that it never happens again,” said OGusers Admin.