The Content Delivery Network market was valued at $11.76 billion in 2020. It was only two years ago; the need for fast and worldwide-accessible data transfer/sharing has been increasing ever since. By 2026, the entire industry is poised to reach a value of $49.61 billion, at a Compound Annual Growth Rate (CAGR) of 27.30%.

There are a few prominent companies in the industry, such as Amazon, Akamai, Google, and Fastly. However, I will not talk about them in this article. Our today’s focus is on BlazingCDN – a fresh player in the market, cost-effective, and the embodiment of exemplary customer relations management.

BlazingCDN offers surprisingly good performance when you compare its price to other providers. The deployment of powerful servers in the most congested locations ensures that BlazingCDN’s delivery is on par with Amazon, Google Cloud, and Akamai. 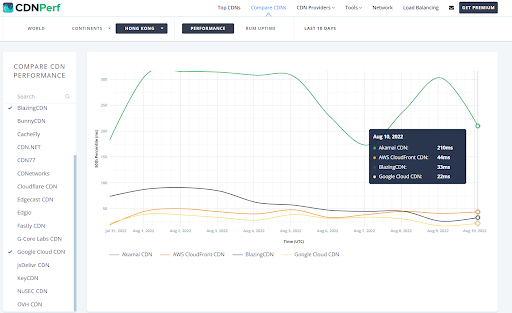 Also, one of the advantages of BlazingCDN is its formidable internet channels (2×25 Gbps) at each edge server’s Point of Presence (PoP). Due to the sheer quantity and strength of the servers, every client has more than 3Tbps summary channel capacity at their disposal, which is many times higher when compared to a separate server, or VDS (100 Mbps – 1 Gbps). Because of that, there is no single point of failure if, let’s say, a lot of user requests overload the channel. DDOS just isn’t a possibility when you have a system like that.

Last but not least, Blazing’s integrated object storage as a CDN content source enables the retention of massive unstructured data amounts. If you’re confused: it’s used for storing images and videos on social media platforms, songs on Spotify, files in, for example, Dropbox, and so on. With BlazingCND’s object storage, it’s feasible to store as much as you want, and even more.

BlazingCDN’s pricing model is a positive rarity in our modern cutthroat business world. Just check out the cost compared to all other providers – while being the cheapest solution, Blazing often outperforms even the most established services. It’s not hard to understand that the majority of CDN users are oblivious to how the big providers overprice their products (sometimes as high as 50x to service’s actual cost).

The best price is not the only thing that BlazingCDN offers you as a cost-incentive benefit. The other key ones are:

BlazingCDN is not just another cheap CDN option. Their proven PR management with an amazing customer support team ensures the most pleasant user experience. At the same time, the service’s content storage and delivery performance make it the absolute best CDN in price/quality ratio by a stretch. Just try them out – you’ll see what I’m talking about.

What Was The Trojan Horse?

How To Detect Mitm?