It is very unlikely that the exchange and its users will ever again access to those funds. After the death of its owner, approximately $145 million in cryptocurrency funds are frozen in the cold (offline) wallet of the Canadian cryptocurrency exchange portal.

According to a message posted on its website, QuadrigaCX, the exchange, filed legal protection against its creditors under Canadian law until it regained access to the funds.

Exchange problems began in December 2018 when Gerry Cotten, the CEO of Crohn’s disease, died in Jaipur, India. Cotten was the only one to have access to the cold wallet of the company.

Despite his death, the exchange continued to operate on its hot (online) wallet and fiat currency bank accounts for almost a month. The death of Cotten was not even noticed by most of the users of the exchange until two weeks ago when his widow, Jennifer Robertson, announced his passage to Reddit, triggering a massive withdrawal of funds that destabilized the trade. 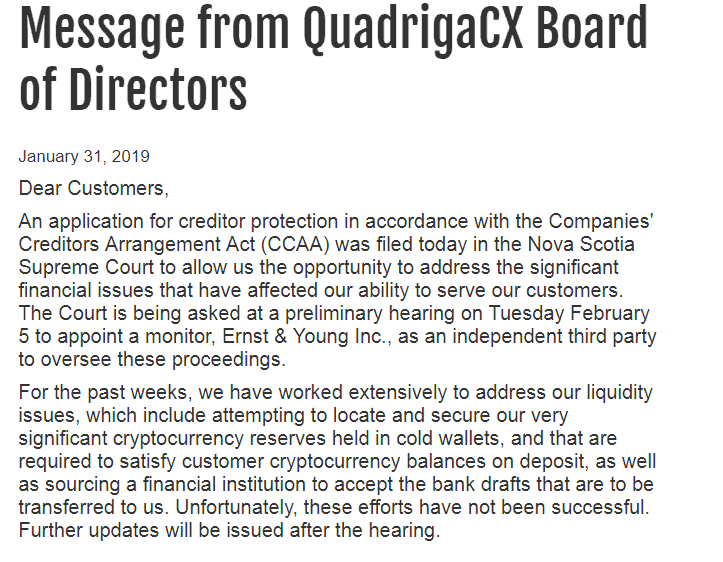 “For the past few weeks, we have worked extensively to address our liquidity problems, including the attempt to locate and secure our very large cryptocurrency reserves held in cold wallets, which are required to meet customer deposit cryptocurrency balances, as well as the procurement of a financial institution to accept the bank drafts to be transferred to us, “says the company’s board of directors.

Some of these efforts “to locate and secure “the cold wallet funds included hiring an IT consultant to try to decrypt the Cotten laptop and access the cold wallet password, according to the CCN news portal. This wallet is in the middle of the operation of QuadrigaCX. According to a court document submitted this week by Cotten ‘s widow, obtained by CoinDesk, another cryptocurrency news site, it stores quite a considerable amount of funds.

According to an Ethereum market analyst, around 0.5 percent of all Ether coins currently in circulation are now frozen in Cotten cold wallet.

QuadrigaCX frozen funds According to the same court filing, in addition to the $145 million in cryptocurrency funds frozen in Cotten’s cold wallet, the company also owes another $53.5 million in fiat currency, which it cannot now pay after using some of its reserves and after other accounts have been frozen by the Canadian authorities due to irregularities-according to an AMBCrypto report.

More and more users get angry that for valid reasons they cannot access their QuadrigaCX funds. Some even question Cotten ‘s death, claiming that he may have faked his death and that he now lives from the funds he had stored in the cold wallet.

QuadrigaCX, the Canadian crypto-exchange that has been a hot topic across the board in the past few days for allegedly losing the access to their cold wallet private keys, own ~430,000 $ETH.

QuadrigaCX is now asking the court for a stay of proceedings to prevent any legal proceedings that might arise from this mess. They also request the court to appoint Ernst & Young, an international accounting firm, to supervise its operations until everything is sorted out. It is very unlikely that the exchange will ever again have access to these funds.

A report published this week by CipherTrace showed that hackers stole more than $1.7 billion in cryptocurrency from exchanges in 2018. The QuadrigaCX case may be one of those weird events in which users lose money and it is not due to hackers or scams.

Which Variation Of A Phishing Attack Sends Phishing Messages Only To Wealthy Individuals?