Malwarebytes released AdwCleaner 7.4 which includes a new feature that is designed to detect and delete pre-installed software, generating income for the hardware developer, thus reducing the cost of the device.

The device comes often with third-party preinstalled software, which include antivirus testing, backup software, burning DVD software, media players etc., when you buy hardware. Since software developers from third parties pay the manufacturer to include its software, producers can reduce the hardware price so they remain competitive.

The problem is that many of these pre-installed programs or what is often referred to as Bloatware slows a computer, shows up annoying nag screens, and is just a general nuisance.

Malwarebytes now aims at bloatware with new computers and laptops with the release of AdwCleaner 7.4.

Some examples of software that AdwCleaner detects are in our tests with AdwCleaner 7.4 and conversations with others:

On the “Preinstalled Software” tab in the Quarantine you can always restore a program after it has been removed. 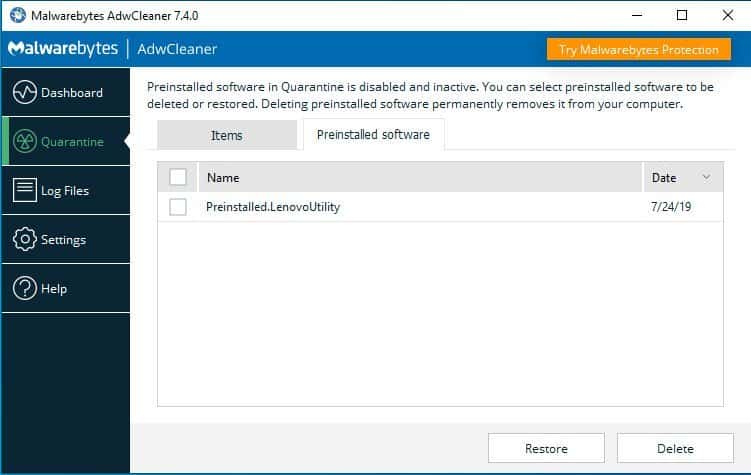 This is a welcome feature for users that hate the bloatware that they squeeze out of a new PC without having to install smoothly.

If you use AdwCleaner and any preinstalled software is detected, let us know the names of the detection to add to the article.

The complete AdwCleaner 7.4 changelog is available as follows: