Table of Contents
About the Exposed Data
Database exposed

A publicly available ElasticSearch database exposed an enormous amount of information on the global automotive giant Honda internal network, showing potential security vulnerabilities which could be exploited by potential attackers.

The ElasticSearch misconfigured database contains about 134 million documents with 40 GB of information for approximately 300,000 employees worldwide.

“The information available in the database appeared to be something like an inventory of all Honda internal machines,” says Justin Paine, the researcher who found the unsecured ElasticSearch instance.

“This included information such as machine hostname, MAC address, internal IP, operating system version, which patches had been applied, and the status of Honda’s endpoint security software.” 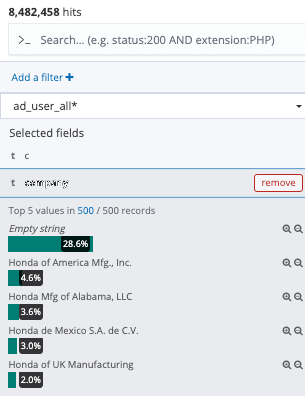 About the Exposed Data

The unprotected ElasticSearch database revealed very specific data on hundreds of thousands of Honda employees like names and emails as well as on the network information, operating systems, OS versions, hostnames and patch status of your computer’s terminal security vendors.

In addition, approximately 3,000 data points were stored in an’ uncontrolled machine’ table which is a list of Honda’s internal network computers that have not used a security device from the endpoint.

“If an attacker is looking for a way into Honda’s network knowing which machines are far less likely to identify/block their attacks would be critical information. These “uncontrolled machines” could very easily be the open door into the entire network,” adds Paine.

The database also contained information on higher-value computers such as CFOs, CSOs and CEOs, which could enable attackers with sufficient knowledge to locate and access information they could use for highly targeted attacks.

The data was updated daily, as it has discovered after analyzing database activity over 30 days, with approximately 40,000 new entries containing information about the Honda staff from around the world and their current network, security and OS status on their computers.

Honda’s exposed database with a value of about three months starting on March 13 was founded by Paine on July 4th and after a few days of trying to find a contact to disclose his findings responsibly he was able to make contact on July 6th in the morning.

The database remained open for about six days as Shodan’s search for the discovery showed the time stamp of the discovery on 1 July 2019.

Ten hours later, Honda secured the data and sent the following statement to the researcher for reporting the vulnerable database:

Thank you very much for pointing out the vulnerability.  The security issue you identified could have potentially allowed outside parties to access some of Honda’s cloud-based data that consisted of information related to our employees and their computers. We investigated the system’s access logs and found no signs of data download by any third parties.  At this moment, there is no evidence that data was leaked, excluding the screenshots taken by you.  We will take appropriate actions in accordance with relevant laws and regulations, and will continue to work on proactive security measures to prevent similar incidents in the future.

“What makes this data particularly dangerous in the hands of an attacker is that it shows you exactly where the soft spots are,” concludes Paine.

“I am specifically not going to name the major endpoint security vendor that protects Honda’s machines, but the data makes it clear which vendor they use and which machines have the endpoint security software enabled and up to date.”