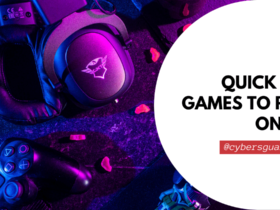 Traditionally, gamepads have been linked with console gaming, whereas a keyboard and mouse have been connected with PC gaming. On a PC nowadays, such distinctions are blurred, and utilizing a gamepad is commonplace, if not expected. But what about using a gaming console with a keyboard and mouse? Let us explain. It’s both simple and a little complicated.

With a gaming console, why use a mouse and keyboard?

The major reason to utilize a mouse and/or keyboard with your console is that certain game genres are easier to control. First-person shooter games like Call of Duty or Battlefield are good examples. A computer mouse is a deadly FPS (first-person shooter) gaming tool since it enables for precision snap-aiming.

Real-time strategy games are also ideal for playing with a mouse. It’s significantly more convenient to use a pointer to choose or drag-select units and issue instructions than it is to use a gamepad.

MMORPGs (Massive Multiplayer Online Role-Playing Games) benefit a lot from keyboards because they often require the player to use a lot of shortcut keys to play efficiently.

Which consoles allow you to utilize a keyboard and mouse?

Consoles have long supported keyboard and mouse input. Both the Super Nintendo Entertainment System and the PlayStation 1 had official mouse, for example. However, there is only a small number of consoles that are relevant to this subject in modern terms:

Except for the Switch, which solely supports keyboards, all of these consoles support USB keyboards and mouse. On the PS4 and PS5, Bluetooth keyboard and mouse compatibility is also available. However, not every keyboard and mouse works, according to Reddit posts of users discussing their experiences. So, before you invest any money, double-check if a Bluetooth mouse or keyboard is suitable.

Because neither the Xbox One nor the Xbox Series consoles support Bluetooth, you’ll have to rely on wired connections. Finally, the Switch does not have any Bluetooth capabilities.

How to Use a Console with a Keyboard and Mouse?

It’s nearly as easy to use a keyboard and mouse with your console as it is on a computer. Simply plug your peripherals into an accessible USB port, and the console will recognize them. After that, you can use them with any application that supports them.

Your results may vary, but there’s no harm in trying if you already own a mouse or keyboard.

Which games on the console support the usage of a keyboard and mouse?

When it comes to mouse and keyboard support, the selection of games is pretty modest. Each of the consoles listed above has a limited number of games that can be played with a keyboard and mouse. Nonetheless, there are many more than can be described here, especially when multiple consoles are considered. As a result, we’ll focus on a few of the games that benefit the most from keyboard and mouse support.

If you have an Xbox One, these games support mouse and keyboard right out of the box:

The alternatives on PS4 with native support are far more limited than on Xbox One. However, we expect additional games to be added to the list as time goes on.

You won’t be playing first-person shooters with a mouse on Switch anytime soon because it only supports USB keyboards. Unfortunately, we were unable to get reliable information about Switch games that work with a standard wired USB keyboard. So, unless you have trouble with text entry, acquiring a Switch keyboard does not appear to be useful.

On a console, what else can you do with a mouse and keyboard?

It’s not only about playing games with a keyboard attached to your console. Using a gamepad to enter text has always been a tiresome task. It is much easier to enter text when you have a keyboard. With the integration of consoles and social media these days, you’ll find yourself typing posts for content you share from your console.

In Unsupported Games, Using a Keyboard and Mouse

You might believe it’s pointless to attempt because so few games on consoles support a mouse and keyboard. In games that don’t support them, however, there are ways to use a keyboard and mouse.

A specific console mouse and keyboard adaptor is required. These devices fool the console into thinking you’ve plugged in a gamepad. After that, the adapter converts mouse and keyboard commands to gamepad commands. This isn’t quite the same as using a mouse, but it’s a lot closer than a gamepad. You can use a mouse to play almost any first-person shooter this way. It won’t function well with games that use a gamepad-specific mouse cursor, but it will work well with first- and third-person shooters.