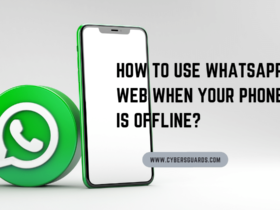 How to Use WhatsApp Web When Your Phone Is Offline?

Contents
What Is “Catfishing” and What Does It Mean?
What Happens When You’re Catfishing?
What Causes Catfishing?
How Can You Tell If Someone Is Trying to Catfish You?
Photographs of Fake Profiles
Language Abilities
They are unfathomably perfect.
They don’t have any friends.
Sob stories and money requests
If You’re a Victim, Here’s Where You Can Get Help?
Catfish FAQ
What are three signs that you are being Catfished?
What is catfishing in social media?
How can you tell if someone’s a catfish?
What are examples of catfishing?

While social media’s public face is warm and cuddly, it’s a type of internet service with a real dark side. Social media can sabotage your productivity, compromise your privacy, and negatively impact your mental health, but it can also make you a target of fraud or bullying. All of these can be accomplished by catfishing.

Catfishing is a complicated phenomenon that is difficult to detect. It’s a type of identity fraud in which someone (or a group of people) creates a fictitious online persona and then goes after specific people, attempting to build a (typically romantic) online relationship with them.

A catfishing scam can be devastating, but you can avoid a lot of misery if you recognize the warning signals.

What Is “Catfishing” and What Does It Mean?

The term “catfishing” was coined to characterize this distinct sort of internet scam after watching the documentary Catfish. We witness a young man form an online relationship with a woman on Facebook who turns out to be fully made up in that video.

A scene inspired the term in the film that described how cod in vats are kept active by coupling them with catfish. Catfishing perpetrators, in this example, keep us all on our toes.

Catfish: The TV Show, an MTV show, helped to popularize the phrase. This was reality television in the vein of Cheaters, in which catfishing victims confront their perpetrators with the help of the show. That’s why it’s now known as catfishing.

What Happens When You’re Catfishing?

While this isn’t always the case, the catfisher is usually the one who initiates contact with the victim. A direct or private message with some form of the opener will usually be sent to them. “Hey there, handsome,” or “I can’t stop staring at your profile photo” are two possible phrases.

The catfisher will begin to weave their web if the victim engages with them. Catfishers are known for playing the long game. The con could be carried out over a long period, gaining the victim’s trust.

Catfishers are skilled at exploiting and manipulating the personal flaws of the person they are pursuing. For example, someone lonely has lost a spouse or is in some other way vulnerable.

One of the more difficult parts of catfishing is that its perpetrators can have a variety of motives. Money is the most obvious example. Hundreds of people are duped out of their money by the online catfishing industry every year. Then there’s catfishing, which is a nasty form of cyberbullying. The goal is to humiliate the victim while also torturing their minds.

Finally, it’s possible that catfishing isn’t done maliciously. Rather, some people take advantage of the anonymity provided by the internet to construct fictional personas that allow them to play out fantasies or explore their love or s-e x ual natures.

A married individual, for example, might have a virtual romance with someone online while hiding behind a fictitious identity. Unfortunately, despite the lack of malice in this sort of catfishing, the victim suffers the same consequences.

How Can You Tell If Someone Is Trying to Catfish You?

It can be not easy to spot a catfishing attempt. To begin with, not all warning indicators apply to all catfishers. The catfisher’s motivations determine the type of attack on you. When your new internet buddy begins to make romantic overtures, there are a few things to watch.

Stealing profiles from other people is one of the most common strategies used by catfishers. It’s possible that their profile image came from any place. Reverse image search is a useful approach to discover false profile photographs or other photos added to their profile, albeit it’s not perfect.

For a quick tutorial on tracing photos back to their source, see What Reverse Image Search Is & How To Use It.

You’d think the catfisher wouldn’t want to display their true face because they don’t look like their profile photo. As a result, you’ll get an explanation for why a video call or face-to-face encounter isn’t possible. They may even refuse a voice call if the person is of a different gender than the bogus account or has a completely different accent than expected.

It’s a significant red flag if a catfisher pushes for a meaningful connection but won’t do anything as basic as jump on Zoom to chat with you.

Although poor writing and grammar are not always indicative of a scam, you should be wary of anyone who communicates with you with poor spelling and language. But, of course, advanced catfishers can get around this by building a phony profile for someone who speaks a second language.

They are unfathomably perfect.

We don’t mean to imply that you, dear reader, aren’t a total hottie who wouldn’t be able to snare the love of your life. But, on the other hand, Catfishers have a propensity for creating bogus profiles that are a bit too flawless. They could be attractive, intelligent, qualified, skilled in every interest, and check just about every other box you have for a spouse.

Consider how likely it is that such a person exists and that they are desperately seeking romance with you.

They don’t have any friends.

A catfisher’s bogus profile can be filled with details about their fictitious existence, but faking an entire social network is more difficult. Are there any other people they know? Are all of their contacts strikingly similar to fraudulent accounts? Is there anyone else they interact with? Trust your instincts and assess the account based on how genuine it feels.

You’re likely to get a request for money after developing some trust with you and ensuring there’s some romantic desire. Typically, there is a “medical emergency”, or the individual believes they are about to be evicted.

Whatever the circumstances, the need for money is pressing, and your newfound devotion is exploited to obtain it without requiring too much critical thinking on your part.

Catfishers use a variety of methods for stealing money from their victims. Some people may exaggerate a single incident into ever-increasing sums as the “emergency” worsens before dissipating. Others may take tiny amounts of money over a long period to keep the scam going.

Keep in mind that not all cases of catfishing involve money. So just because you don’t engage in this behaviour doesn’t mean you’re free and clear.

If You’re a Victim, Here’s Where You Can Get Help?

If you feel you’re being catfished, the most crucial thing to do is to block the account. Don’t engage with the person anymore, and report their account to the social networking platform.

You may also want to notify the police in some circumstances. For example, many police departments now have specialist teams for offences like catfishing. They can assist in locating the real individual and providing other sorts of assistance, especially if you have been defrauded of funds.

You should also take into account any psychological trauma you may have suffered. Check to see if there are any cyberbullying support groups you can reach out to for assistance and further information. Of course, if you need help, you should call out to trusted friends and family members. Never feel bad about being duped by a catfisher. It can happen to anyone at any time!

What are three signs that you are being Catfished?

What is catfishing in social media?

It’s a word for someone who goes online and pretends to be someone else. For example, a catfish looks for friends or love partners on the internet using fraudulent images and occasionally a false character.

How can you tell if someone’s a catfish?

If you suspect you’ve been catfished, here’s what to look for.

What are examples of catfishing?