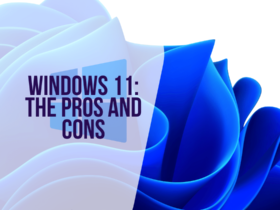 Windows 11: The Pros and Cons

Contents
1. Privacy Invasion
2. Weapons with the ability to operate independently
3. Human Job Loss
4. Terrorism Inspired by Artificial Intelligence
5. Bias in AI
How may AI be a threat?
Weapons that are self-sufficient
Discrimination
What Is The Reason For The Recent Interest In Ai Safety?

In light of this, consider the following five threats that Artificial Intelligence may pose in the future.

Everyone is entitled to privacy as a basic human right. Artificial Intelligence, on the other hand, may in the future result in a loss of privacy. It is still feasible to track you while you go about your day today. Face recognition technology, which is included into all security cameras, can help you stand out in a crowd. Because of AI’s data-gathering abilities, you may generate a chronology of your everyday activities by combining information from multiple social networking sites.

China is actively developing an Artificial Intelligence-based Social Credit System. This system will assign a score to every Chinese citizen based on their actions. Defaulting on loans, listening to loud music on trains, smoking in non-smoking locations, playing too many video games, and so on are examples of this type of conduct. A low score could result in a travel ban, a reduction in social status, and other consequences. This is an excellent example of how Artificial Intelligence might lead to absolute loss of privacy and access in all aspects of life.

2. Weapons with the ability to operate independently

Military robots that can seek for targets and aim independently according to pre-programmed instructions are known as autonomous weapons or “killer robots.” These robots are being developed in practically every technologically advanced country on the planet. Indeed, a top official from a Chinese defence business declared that future battles would not be fought by humans, and that the use of lethal autonomous weapons will be unavoidable.

However, having these weapons carries a number of risks. What happens if they go rogue and murder people who aren’t even related to them? What if they can’t tell the difference between their targets and innocent people and accidentally kill them? So, who’s to blame for that? A far more serious issue would arise if these “killer robots” were developed by regimes who have no regard for human life. It would be impossible to destroy these robots in that case! In light of these issues, it was agreed in 2018 that autonomous robots would require a final instruction from a human before attacking. However, as technology advances, this challenge may become exponentially more difficult to solve.

Artificial Intelligence will undoubtedly take over professions that were previously handled by people as it advances. According to the McKinsey Global Institute, by 2030, about 800 million jobs could be lost globally due to automation. But then there’s the matter of “What about the people who have lost their jobs as a result?” Some individuals believe that Artificial Intelligence would result in the creation of a large number of jobs, which will help to balance the balances. People could transition from jobs that are physically demanding and monotonous to jobs that need creative and strategic thinking. Less physically demanding professions may also allow people to spend more time with their friends and family.

People who are well-educated and wealthy are more prone to experience this. This could widen the wealth divide between rich and poor people even more. When robots are employed in the workforce, they are not required to be compensated in the same way that human employees are. As a result, the owners of AI-driven businesses will get all of the benefits and will become even wealthier, while the humans who have been displaced will become even poorer. As a result, a new society structure will be required to ensure that all humans may earn money in this scenario.

While Artificial Intelligence might make a significant contribution to society, it can also assist terrorists in carrying out terrorist operations. Drones are already being used by a number of terrorist organizations to carry out strikes in other nations. ISIS launched its first successful drone attack in Iraq in 2016, killing two civilians. This would be a terrifying form of terrorist attack aided by technology if thousands of drones were launched from a single truck or automobile, each programmed to murder only a certain group of people.

Terrorists might potentially utilize self-driving cars to deliver and detonate bombs, or construct firearms that can track and shoot without the need for human intervention. These firearms are already in service on the border between North and South Korea. Terrorists could gain access to and employ the above-mentioned “killing robots,” according to another concern. While governments may still be ethical in their efforts to prevent the death of innocent people, terrorists will have no such morality and will utilize these robots in terror strikes.

Humans are occasionally biased against other religions, genders, ethnicities, and other groups. Human-developed Artificial Intelligence Systems may potentially be influenced by this prejudice unknowingly. Because of the inaccurate data supplied by humans, bias may enter into the systems. Amazon, for example, has discovered that their recruiting algorithm, which is based on Machine Learning, is biased against women. The amount of resumes submitted and the candidates hired during the last ten years were used to create this algorithm. The algorithm also favored men over women because the majority of the candidates were men.

In a separate occurrence, Facial Recognition was used by Google Photos to label two African-Americans as “gorillas.” This was an obvious example of racial bias, as the program incorrectly classified people. “How do we combat this Bias?” is the question. How can we ensure that AI, like some humans, is neither racist or sexist? The only way to deal with this is for AI researchers to manually remove bias while building, training, and selecting data for AI systems.

When you think about artificial intelligence’s hazards, the first image that comes to mind is that of a sentient killer robot. This isn’t the most likely consequence, though. Instead, the emergence of artificial intelligence is much more likely to have less obvious but nonetheless important prospective implications.

So, what are the true dangers of AI’s rapid development? Is this a legitimate issue, or are these fears founded on fear rather than scientific evidence?

How may AI be a threat?

While we haven’t yet attained super-intelligent machines, the legal, political, sociological, financial, and regulatory challenges are so complicated and wide-ranging that we must examine them now in order to be ready to properly function among them when the time comes. Artificial intelligence can already offer problems in its current state, aside from preparing for a future with super-intelligent computers. Let’s look at some of the most significant AI-related dangers.

Weapons that are self-sufficient

One way AI can pose a risk is if it is intended to perform something dangerous, such as autonomous weaponry designed to kill. It’s even possible to see a worldwide autonomous weapons race replacing the nuclear arms race.

Because machines can gather, follow, and analyze so much information about you, they might potentially use that data against you. It’s not difficult to envision an insurance company telling you that you’re uninsurable because you were caught on camera talking on your phone multiple times. Your “social credit score” may cause an employer to refuse you a job offer.

Any technological advancement has the potential to be abused. Artificial intelligence is now being employed for a variety of good causes, including improving medical diagnostics, discovering new cancer cures, and making automobiles safer. Unfortunately, as AI’s capabilities grow, we’ll see it employed for dangerous or evil objectives as well. Due to the rapid advancement of AI technology, it is critical that we begin debating the best ways for AI to evolve positively while minimizing its negative potential.

What Is The Reason For The Recent Interest In Ai Safety?

Many major AI experts have joined Stephen Hawking, Elon Musk, Steve Wozniak, Bill Gates, and other big names in science and technology in expressing alarm about the risks posed by AI in the media and via open letters. Why is this topic suddenly in the news?

The idea that the pursuit for strong AI would eventually succeed was often regarded to be science fiction, centuries or perhaps millennia in the future. However, because to recent advancements, several AI milestones that were once thought to be decades away have now been achieved, prompting many scientists to consider the potential of superintelligence in our lifetime. While some experts believe human-level AI will take centuries, the majority of AI researchers at the 2015 Puerto Rico Conference predicted it would arrive by 2060. Because the essential safety study could take decades to complete, it is prudent to begin immediately.

We have no way of knowing how AI will act because it has the potential to become more intelligent than any human. We can’t use previous technical advancements as a starting point because we’ve never produced something that can outsmart us, either intentionally or unintentionally. Our own evolution may be the best indication of what we may face. People today rule the world, not because they are the strongest, quickest, or largest, but because they are the most intelligent. Will we be able to maintain control if we’re no longer the smartest?